One of the simple illustrations we've seen explaining how to make bean to bar chocolate is by Anna Bazyl from Cacao Magazine (see below).

From harvesting to wrapping, chocolate-making is a complex and refined process that can be manipulated throughout certain stages for the purpose of achieving a particular flavour or texture. The evolved and meticulous process from bean to bar is reflected in the unique and delicious taste that comes from an exceptional plant. In this 9 step process, they will walk you through how chocolate is made. 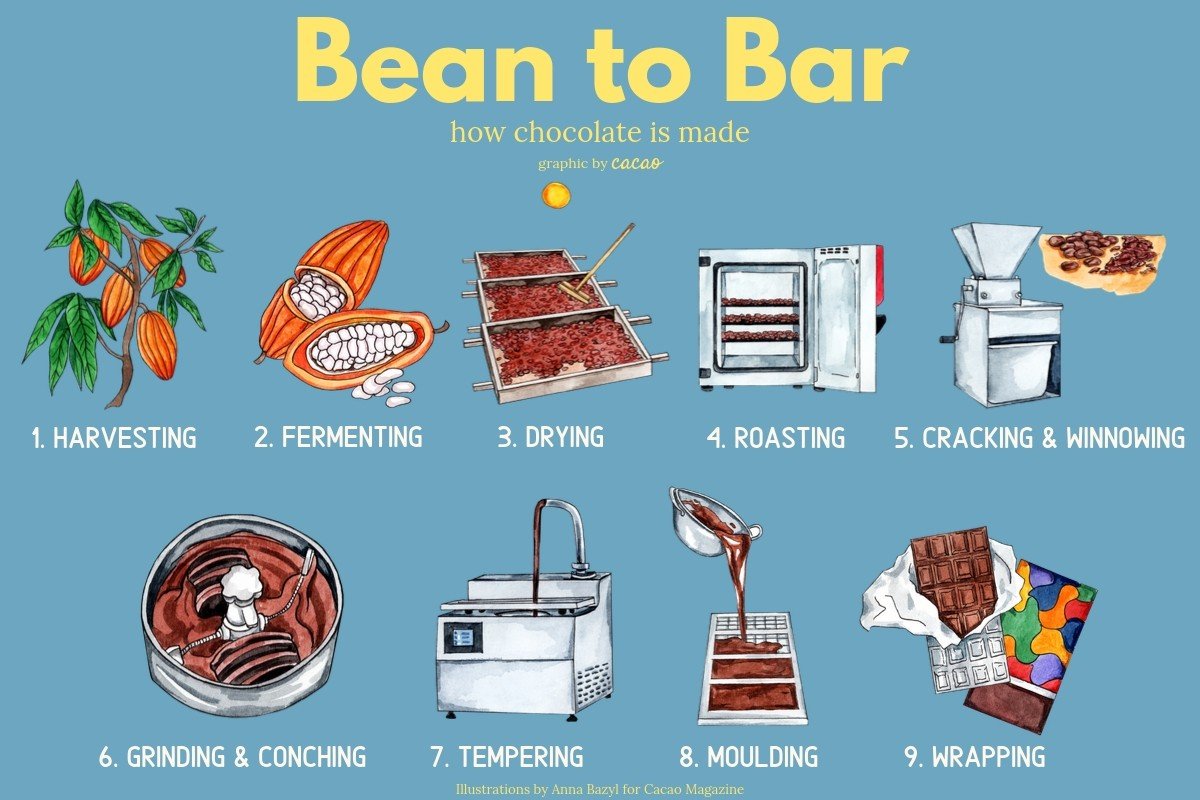 The cacao tree grows in tropical climates throughout the world, and has the unusual trait of having both flowers and fruit on the tree at the same time. The fruit of the tree is known as the cacao pod, which grows on the trunk and branches. Each pod ripens at a different time, so expertise is needed in choosing the right time to pick the pod. Picking is usually done with a machete, and great care is needed to ensure that the flower cushion on the tree is not damaged so that more pods can grow in the future.

After the pods are opened and the beans are exposed to oxygen, the fermentation begins. The beans and pulp may be contained in banana leaves or wooden boxes, which contain holes for excess liquid to escape. The beans are mixed or turned to enable this process and the temperature naturally raises to 40-50°C. This stage is a major factor in developing the cacao flavour and can take up to eight days, depending on the bean type.

Following the fermentation stage, the beans contain a high level of moisture, which needs to be reduced in order to avoid overdeveloping, which can adversely affect the flavour. In most origins, cocoa beans can be sun-dried. In wetter climates, however, this is not possible so alternative methods are used. For example, in Papua New Guinea, beans are dried using open fires, giving them a distinctly smoky flavour. Once dried, the beans are then sorted and bagged, before being shipped to makers around the world.

To find out more about fermenting and drying process from Gaura plantation, watch the video below.

The next step is for chocolate-makers to roast their dried cacao beans. The roasting time and temperature will vary by bean type and quality, as well as the objectives of the chocolate-maker. In addition to being an important factor for flavour development, the roasting process also further reduces the moisture content and kills off any lurking bacteria.

Following the roasting process, the outer shell becomes thin and fragile. The beans are then cracked manually or with a machine, after which the shells can be winnowed from the bean kernels, also known as cocoa nibs. The cocoa nibs are used in the production of chocolate, whereas the antioxidant-packed shells can be used for other purposes, such as making cacao tea or even garden fertiliser.

These two processes are commonly combined into one with the use of a melangeur. First, the nibs are ground into a thick paste known as cocoa mass. This paste consists of both cocoa solids and cocoa butter, the natural fat of the cocoa bean. During the conching stage, some chocolate-makers add extra ingredients such as sugar or milk. This step may take anything from two hours to two days, and the particulars of the process are crucial as they will affect the final texture and flavour.

This is the process of raising and lowering the temperature of the chocolate so that it is formed into the right consistency through the treatment of the crystals. Without tempering, the chocolate would be dull and crumbly, missing the tempting shine and recognisable snap of a finished chocolate bar. This is traditionally done by hand but the process can also be sped up with a tempering machine.

Once tempered, the melted chocolate is poured into the chosen mould and tapped against a hard surface to remove air bubbles. Craft chocolate-makers often do this by hand, while for larger manufacturers the process is mechanised for efficiency.

After the chocolate has cooled and solidified it is inspected for quality control. The final bar is then carefully wrapped in foil or paper packaging to keep it fresh, and labelled with a best before date and ingredients list. After the long journey from bean-to-bar, the chocolate is finally ready to be enjoyed!

Watch the video below to embark on a journey to discover how Ghaura chocolate is made.